Ryoko Nishimura is a Japanese flower artist based in Kyoto city. She stays true to ikebana with a long history in Japan.
In 2012, she held flower exhibition with the concept of ikebana on a stream used to be a canal in Kyoto to bridge the gap between the traditional ikebana and modern lifestyles.  In 2015, it was held flower exhibition on a canal in front of  Amsterdam national museum with a support of AFK”Amsterdam found if Kunst(=Art)”. The flower work extended over 60 meters with roses, peonies, and hydrangea. It appeared in some newspapers there.
After back to Japan, she decided her two missions. First, telling ikebana with authentic styles with true history. Second, looking for a way to enjoy ikebana in modern lifestyles. Today, she holds not only an exhibition, gives lessons and lectures.

ーHow can I create ikebana on a canal in Amsterdam?ー

I’ve held some flower exhibitions on street since 2012.
Some people say “It’s not ikebana”.
For me,  my works are “Groping ikebana in modern Japan”

In ikebana history,
they created two traditional styles “Rikka” and “Seika”
which hasn’t lost a step even today.
Both were created to decorate the room “Zashiki”,
traditional Japanese parlor floored with tatami mats.
Since then, ikebana was developed with zashiki development together
until 19 centuries.

However, Japanese life has started changing dramatically
into diversity same as many countries after 20 centuries.
Traditional houses definitely decreased
where ikebana flowers should be decorated.

How can I create ikebana on a canal in Amsterdam?

The question sounds far fetched
with which I came up during my stay in Amsterdam in 2015.
Now I know it is the key question to keep being an ikebana artist.
On the other words,
How can we keep creating Ikebana
in this country decreasing zashiki?

One day, suddenly I hit on an idea walking on a street.
In Amsterdam the city established with canals,
streets go straight far away along canals.
It’s completely different from my city Kyoto
built in a grid pattern in the small area.
There were elm trees along the straight long streets.
They showed up on such street and old brick buildings.
At the moment I found that,
I was able to convince myself that
I can create ikebana flower on a canal in Amsterdam.

What is the most different thing of “Ikebana” from western flower arrangement is
figure and ground.
When we create flower works  in Japanese way,
we try to emphasize a beauty of the place.
Flowers are ground not figure.
(Then space will show flowers beautiful, we believe)
Come to think of it, it’s not only a talk about zashiki.
I found what ikebana artists are obliged is
creating flower work which can make the place more beautiful.

Flower exhibition “United Flowers in Amsterdam” got a big success.
More than a hundred people in Amsterdam came to the opening ceremony included  Japanese ambassador.
I was able to believe this success when I heard the word from a visitor
“It’s like a big present for Amsterdam!”

What I thought there has still shaped my attitude to ikebana and
support my two missions.

-Telling ikebana with authentic styles with true history.
– Looking for a way to enjoy ikebana in modern lifestyles. 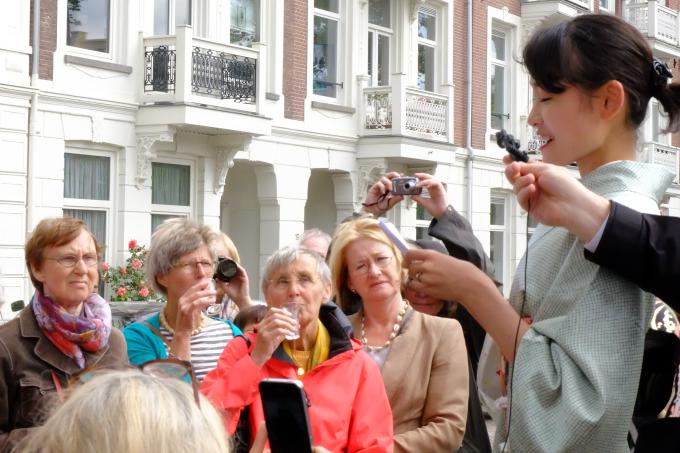