It’s not too much to say that
all of the Japanese traditional cultures are based on four seasons
for example, traditional houses, foods, kimono art like paints, tea ceremony
and ikebana- flower arrangement.

Of course, we know many countries in the world have four seasons.
Why Japanese people can’t part with four seasons?
As an environmental factor,
it is so humid in Japan that you can’t escape
no matter how thick wall you build or ingenious clothes you wear.
We can’t run away from the air.

Japanese people have decided to accept this difficult climate from ancient.
They designed everything
to show coolness in hot humid summer
and warmness in cold frozen winter.

There is one more reason.
It’s because Japanese people still love four seasons.
Not only that we love “changing” seasons.
On the oldest anthology of poems,
their attention was always at passing time.
The main theme of ancient poems was hopeless love and changing seasons.
Sad romance and flowers have been a nice motif in Japan to show passing time.

For we Japanese, seasons don’t switch with a button.
More likely it is changing little by little,
day by day, moment by moment.
Ikebana the unique flower culture was established with this sense.

For people on this small island, flower is not only flower.
It is a symbol of four seasons which is the root of all the Japanese cultures.

Experiencing ikebana will be interesting itself.
Furthermore, I hope it will be the key to understand this small island “Japan”
on the east edge of the world
which has so many unique and beautiful cultures.

Cherry blossoms
We have two national flowers.
One is chrysanthemum the crest of the royal family,
and another is cherry blossoms.
It is the flower of spring in Japan.
Especially we love this flower when it scatters bravely
on the breeze in a shower of whirling petals
just after full bloom. 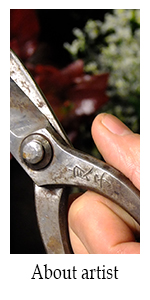 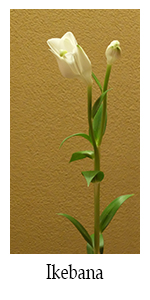 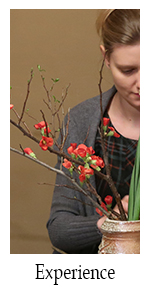